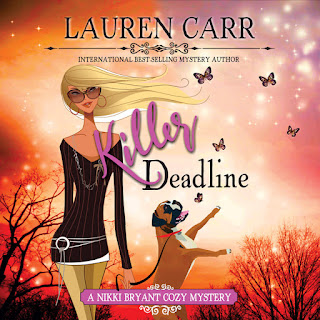 About the book
Folks in Pine Grove, Pennsylvania, claim that where Nikki Bryant goes, trouble is not far behind. Her refusal to back down from a challenge has made Nikki Bryant a top investigative journalist.When an online friend nudges her to join him in a pact to reconnect with their first loves, Nikki and her boxer dog Elmo leave the bright lights of Las Vegas for the charming town of Pine Grove. There, she must face the biggest challenges in her career and life—the first love she had left behind and her father’s unsolved murder.But before she has time to unpack her car, Nikki stumbles upon the dead body of local news anchor, Ashleigh Addison, her childhood rival. Could Ashleigh’s death be connected to an explosive news story that she had teased about airing live? Did that explosive story have anything to do with the murder of Nikki’s father?With the clues in her father’s cold case hot again, Nikki intends to chase down the story of her life until she catches his killer—no matter what it takes.
And I thought
I am always a fan of Lauren Carr.  I have enjoyed each book and each series that she has produced.  Some of the other series have a bit of a Cozy theme goin' on but they really aren't and now she's done it with Killer Deadline.
I enjoyed this new character Nikki she's a true cozy character with a history, a dog and a mystery to solve. And just maybe rekindling a romance.
But first she need to get to the truth about her fathers death.
I enjoy reading Killer Deadline when it was first released earlier this year.
I was fun to go back and now listen to it.  The audio version brought the story to life and I enjoyed this chance to have someone else read the story to me.
Audio books are not my first choice but by accepting the invitation to be on this tour I think I have developed a new interest.
I now enjoy listening to a book while doing other jobs and tasks especially if you have not time to read.
If you enjoy a good Cozy Mystery check out Killer Deadline

I received a complimentary copy.
My review will appear on retail sites and Good Reads.
Killer Deadline and the I Read Book Tour will be promoted
on Social Media

Click here to read more reviews and enter the Giveaway
Posted by GranthamLynn at 10:00 PM