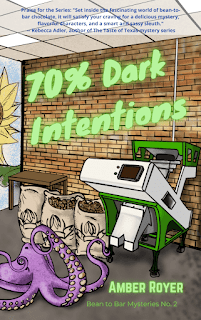 Have you ever been fifteen feet away from everything you ever wanted, separated from it only by a thin glass wall? And you can float in your tank and WANT all the things, but even if you squeeze your way out there’s no way you’re going to make it all the way across the floor and into the other tank before someone catches you? No? Just me then?

And yes, I know, those things have a name. The human who takes care of me calls them fish. But I just think of them as shiny, flashy food. And shiny things and food – those are my two favorites. Because, yeah, obviously. What else would an octopus want?

Actually, I though shiny, flashy food was the all-want – but then my human went away. And I realized that I miss him and want him to come back, even more. My human’s name is Mateo, and he’s traveled all over the world. From my tank, I can see his striped South American rug, and his French teapot. Even his hand-painted ceramic plates from his native Spain – which he has on display above the dining table. And if I look into the mirror behind the living room sofa, I can study the reflection of the small plush llama on the shelf next to the tank of shiny, flashy food. I catch myself changing color just thinking about how badly I want to be in that other tank. Mateo hasn’t figured out yet that I can see the fish in reflection, or he’d probably move the mirror.

But since no one’s here, don’t mind me. I’m just going to squeeze through the tiny gap left when the rock doesn’t get put on top of my tank just right. And I’m going to climb down to the floor and cross onto the striped rug to get the shiny thing off the table that’s been driving me crazy and take it with me to the shiny, flashy food tank. The shiny thing has a key on the end. I haven’t quite mastered keys. I can see how they work when Mateo locks and unlocks his box of important things. But I can’t turn them myself. So forget the key. I’m keeping the shiny, until Mateo takes it away from me.

Mateo actually wasn’t my first human. The guy at the aquarium supply store first sold me to some dude who didn’t realize how much trouble it can be to take care of an octopus. He’d leave me alone all day, and I’d get BORED, and then he’d get MAD when he’d come back and find me out of my tank. And he’d let the water go too long without cleaning it, so by the time he brought me back to the aquarium store, I was really depressed. Mateo had come into the store that day because the aquarium supply guy was a friend of his. Even though Mateo wasn’t planning on getting a room-mate, he was so outraged about how I had been treated, that he took me home with him, and watched over me until I was myself again. He’d put puzzles for me to solve in my tank, and when he left for a long time, he’d turn the TV onto this channel that played nothing buy live fish swimming around in the ocean. That’s how I know something’s wrong: he’s been gone for a long time, and the TV is still a silent, black rectangle.

Mateo has said several times in my presence that he thinks the coolest thing about octopuses is how we change colors when we dream. I had a dream about Mateo in my last-sleep. He was scribbling in his notebook, saying he knew who had started the animal trafficking ring – and that he just needed to figure out what to do about it. I know part of it was a dream – like the part when he turned into a giant clam – but I think part of it was a memory. Not that Mateo ever said who the baddie was he’d uncovered. Not that, even if I knew who it was, I could tell then new girl who has started coming by to take care of me.

New Girl’s name is Felicity, and she is very kind – even after she caught me in the empty tank that used to contain the all-want. I can feel that she too is worried for Mateo. I listened to her conversation with the policeman. She believes Mateo has gone missing because someone might have hurt him. Felicity said that there was a murder outside her chocolate shop, and she thinks whoever committed it must have taken my human too. I don’t want to believe it. She keeps telling me she’s going to find Mateo for me, that I shouldn’t give up hope.

I want to help her. I’ve tried to figure out the details of the case, mainly by eavesdropping. I know that the young man who was killed is from out of town, and he doesn’t sound like anyone Mateo would know. I know that this may have something to do with diamonds – more shiny – always of interest to me. And I know that Felicity is in danger. I can feel it all the way to the ends of my arms.

But if she said not to give up hope, I won’t. In the meantime, do you, uh, think you could toss me a couple of shrimp from the live-food tank over in the corner? Worrying is mighty hungry-making work.

Posted by GranthamLynn at 3:10 PM

Thanks for hosting this post! It was so interesting trying to put myself in the headspace to write from an octopus's point of view!

Thank you for posting such a great article! It contains wonderful and helpful posts. Keep up the good work