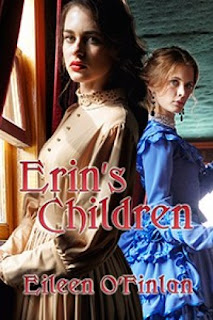 The Sequel to Kelegeen

In 1851 Irish Famine survivor, Meg O’Connor, buys passage to America for her younger sister, Kathleen, and arranges employment for her as a maid. Kathleen’s feisty spirit soon puts her at odds with her employers, the bigoted and predatory Pratts. Driven from their home, Kathleen ends up on a wild adventure taking her to places she could never have imagined.

As a domestic servant in the Worcester, Massachusetts home of the kindly Claprood family, Meg enjoys a life beyond her wildest imaginings. Yet she must keep her marriage to Rory Quinn a secret. Rory, still in Ireland, eagerly awaits the day he will join her. But as the only jobs open to Irish men pay poorly, Rory’s imminent arrival threatens to plunge her back into dire poverty.

On the eve of the Civil War, while America is being rent asunder by the fight over slavery, Irish Catholics wage their own war with the growing anti-immigrant Know Nothing party. Through grave doubts, dangers, and turmoil, Meg and Kathleen must rely on their faith and the resilient bonds of sisterhood to survive and claim their destinies in a new and often hostile land.

I'm Harvey Pratt, second son of Sophronia and Arthur Pratt. My father is co-owner of the Claprood – Pratt Iron Foundry. My older brother, Lemuel, will go into the family business. I'm expected to as well. The problem is, I'm not interest in it. I've got my heart set on something else, but my father insists.

Right now, Father and Lemuel don't see eye to eye on politics and since Lemuel is becoming heavily involved in the Know Nothing party that's causing some terrible rows at home. I wouldn't bother to take notice except that Father, more than ever, insists I enter the foundry business, as well. It's not so much that he wants me, as it is that he's using me as pawn in his attempt to rein in Lemuel. Father hopes that if Lemuel fears he might be replaced by me, he will stop all his Know Nothing nonsense and become a proper Whig. Fat chance, I say!

The flaw in Father's plan is that Lemuel is so thoroughly convinced of his own perfection he can't conceive that he'd ever be replaced by anyone. Frankly, he can have the job since I don't want it. I haven't told Father yet. He would be furious. But I dread the idea of spending my life immersed in a profession I detest and for which I have little aptitude while giving up on the one I'm sure I'd love and at which I would excel.

I'm in a tight spot, as you can see. I can't talk to Lemuel about it. He'd surely mock me at the very least. Mother is too busy with social calls in her attempt to move up in society. Besides, she thinks the sun rises and sets on Lemuel. If he didn't want to go into the family business Mother would surely take his side, never giving up until Father relented. For me, she would not waste her time. My sister, Clara, is a sweet girl, but only a child.

There is only one person in this household to whom I can speak of my dilemma and that's our Bridget. What's a Bridget, you ask? Our servant. Her name is Kathleen, but all the Irish servant girls are called Bridgets just as all Irish men are called Paddies. Lemuel would treat me with utter disdain if he knew I talked to the Bridget about such things. He hates her, hates all immigrants, especially Catholic ones. That's a hallmark of the Know Nothing party - “send them all back!” they say. “America is for Americans only!” Personally, I don't see the harm. After all, Mother was desperate for a servant. It's a powerful sign that one has a certain standing in society. No self-respecting Yankee girl would take a job as a servant so Irish is the only choice.

Our Bridget seems a decent sort. No one, not even Mother or Lemuel can complain about her cooking. It's first rate and that's something that can't be said for most Bridgets. I think we're most fortunate to have found one who can cook.

Strange, though, that she's the only one who understands. She tells me I should do what I love and be happy. I like her even if she is just a Bridget.

Posted by GranthamLynn at 10:00 PM

Thank you, My Journey Back, for being a part of my blog tour for Erin's Children!