A September to Remember by Carole Bumpus Except Post 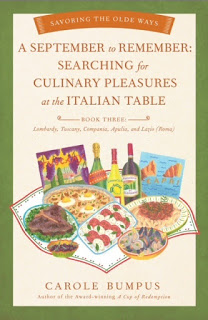 . . . . Like lava flowing down a mountain, the crowd began to surge along the stone roadway with us (my husband and I) caught in the current. All were moving toward the festival grounds at the bottom of the hill. Smoke from the pits of braising meats tantalized us, along with the intoxicating aromas of simmering pasta sauces. The crowd turned toward the ticket booths, and the excitement grew. Music, laughter, and the banter of their melodious language filled the air. Lisa (our Tuscan host) recited the menu to us in English in the most delectable detail. We hungrily placed our orders.

Another push from the crowd propelled us into nearby tents, where we were again greeted with hugs and kisses by those who were already glowing with amiability and wine. Lisa wedged us into the two remaining spaces beside her in the middle of a long table of twenty or more of her closest friends. We had barely been seated when a trumpet sounded, and the feast began. The doors to the kitchen flew open and local waiters proceeded in great numbers to the tables, carrying plates of bruschetta—toasted bread slathered with rich, local olive oil, chopped fresh tomatoes, and succulent olives. One simple bite brought tears of joy to my eyes. The savory yet mellow flavors danced through my mouth. Bottle after bottle of local wine began to magically appear—some from the kitchen and some from under the table.

Again, the waiters swung out of the kitchen. For the prima piatti, or first course, platters of fresh pasta were served. Plates of tortoni, Poderi’s local pasta specialty—delicate pillows filled with cheese and arugula and covered with a bubbling, robust marinara sauce —were reverentially placed before us. The masses swooned with appreciation, and we joined their ranks.

Lisa leaned over and whispered, “I had to live here over twenty years before the older women of Poderi allowed me into the kitchen to help prepare their beloved tortoni. Yes, I could come and help at the Festa, but prepare the tortoni? Heavens, no. And the recipe? Don’t even ask!  It is still a much-guarded secret.”  She laughed with delight.

Cecilia, who had been reserved until then, leaned over the table and shouted, “They’d perhaps have to keel you if you got your hands on the recipe.”  She grinned and sat back as handmade gnocchi with meat sauce and pasta e fagioli were whisked to their designated places along with baskets of Tuscan bread to sop up any lingering juices.

For our secondo piatti, or second course, sizzling grilled meats of beefsteak, pork, chicken, or sausages, all on spears, were passed down the tables. Then, contorni, (vegetable side dishes) of white beans, fried potatoes and mixed green salads followed the meats. Gasp!

Filled to the brim, we all leaned back to gather our collective breath, but to no avail. We were next tempted with formaggio, the cheese course. And the finale was the dolci—dessert—presented with a majestic flourish. Lisa whispered over the tumult surrounding us, “You are to choose either a Salame cioccolata or a Mousse di ricotta.”   We moaned with delight, though we had no idea what either contained.

“Ah,” she echoed our moan, “Mousse di ricotta is sweet, creamy custard made by my dear neighbor, Margarita.”  She pointed across the table to her kindly-looking, blue-eyed friend from Germany, whom we had met earlier. Margarita nodded politely.

“Margarita made this dessert this morning using seventy-two eggs! Can you imagine that? Seventy-two eggs to make her most delectable Mousse di ricotta! And the Salame is not a sausage at all, but a rolled cookie filled with chocolate cream. This was prepared by dear Amelia,” she said pointing to a petite, gnarled elderly woman waving to us at from the far end of the table. Of course, we tried a little of each; we had to. Each was delicate, light, and almost floated off our tongues.

“Mmm,” I swooned, as wine was poured into my cup, as it had been throughout the meal. Like magic, as one bottle emptied, another would pop into its place.

As the evening flowed into night, the air filled with music from a local band in the piazza at the top of the hill. The rhythm reverberated through the tents, and the crowd was on the move. Following a festoon of colorful lanterns, people of all ages made their pilgrimage back up the hill—wizened old women in their finest black dresses, shiny from use and a heavy iron; rotund old men in their best dark suits, a bit rumpled from the lengthy dinner; young couples in sensually-loose clothing looped together with encircled arms.  Giggling children in shorts and tee-shirts grabbed sweaters handed to them by caring parents; swaddled babies snuggled down in the arms of protective grandmothers; and the likes of us, middle-aged folks, laughing at shared stories while enjoying another paper cup of wine—all of us moving uphill to the beat of the music.

The instant we reached the top, the harvest moon broke out above the rooftops and sent golden light cascading onto the heads of the villagers below. Despite, or because of the food, wine and the beauty of the night, everyone began to dance.  The music was a captivating mix of old and new, some rock and roll, some lilting Italian melodies, some familiar American pop tunes. But once the waltzes began, Winston and I stood back to marvel at the grace and elegance of the more skillful dancers. We enjoy dancing together, but on that night, we were not worthy.

As night became morning, the villagers, undaunted by the late hour and copious amounts of wine, continued to dance. No match for these stalwart sorts, we crept back up the stairs to our newfound home. With exhaustion cleaving to every part of our beings, we pushed open the back windows for one last peek. The moon spilled into the room and across the bed, filling the space with light. It flowed like mercury over the ancient hills and valleys across the hills and away from us. And there silhouetted against the night sky, was the medieval fortress and clock tower, shimmering on the highest hill in Manciano. Awash with exhaustion but full of gratitude for having experienced the beauty of both people and place, we slid into bed. Our eyes flickered closed as the final songs reverberated from the streets below—or was that the heartbeat of Tuscany we were hearing?

Posted by GranthamLynn at 11:11 AM

Thanks so much for hosting!