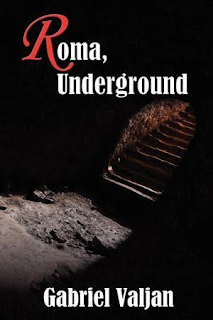 About The Book (provided by IReadTours)
Savvy forensic accountant Alabaster Black is hiding in Rome from her former employer, covert U.S. organization “Rendition.” While there under an assumed name she meets Dante, an investigator, erstwhile explorer and member of the Roma Underground, a band of amateur archaeologists who map the city beneath Rome. With Italian artifacts disappearing at an alarming rate, Alabaster and Dante search for answers and create a trap for the thieves. Through a mysterious online contact Alabaster learns she is being followed, and with her safety at risk she is forced to rethink her chosen alliances and discover hidden truths about herself.

“A provocative thriller with a riveting and surprising plot.”
—M.J. Rose, International bestseller
“...the strong, captivating heroine and an allure of conspiracy and organized crime make this novel an undoubted success.”
—Kirkus Book Reviews
“Conspiracy, double identities, car chases and espionage, all against the backdrop of magical Rome, with its great food and marvelous art history, make this an entertaining, intriguing read.”
—Blogcritics Book Reviews in Brief

An Interview With The Author...
Hello.  Thank you for the opportunity to chat about your Roma Series.  It’s very nice to meet you.

Thank you, Sherry, and thank you for reading the Roma Series.

I was interested in reading this series because of the location.  How/why did you choose as the main location for your series?
I like that you read the Series for location. There’s an element of design on my part to introduce readers to different parts of because it is such a diverse country. However, I’m also attracted to ’s cultural perspective and how it is different from ours in the . An Italian (or any European, for that matter) would be horrified at the idea that a person would have to resort to Kickstarter to pay their medical bills. Every country has its problems, but ranks high for life expectancy, quality of life, and technical innovation.

The series is classified as a Thriller/Suspense but I’m wondering if there might a little romance mixed in too?
Great question. I’ve endeavored to create tension between Bianca and Dante. Will they stay together? Will her fears get in the way of happiness with Dante, who I think is patient with her? In Corporate Citizen, Dante is absent, but their relationship is in crisis by the novel’s conclusion. No spoilers here.

How would you describe Bianca?
She is intelligent, tough, and struggles with intimacy (and for good reason, on this last point). I like to think of her as a romantic disguised as a cynic who wishes to be proven wrong about love and men.

I’m curious, is Bianca’s character based on a real person?
It is more accurate to say that Bianca is a conflation of several people I’ve known. I did know hackers and extremely intelligent individuals, who were socially inept and…um, difficult. In creating Bianca, I wanted to avoid the ‘thinks and acts like a man’ and ‘girly-girl.’ Every author, I hope, wants to create a multidimensional human being, with strengths and flaws. I had to select virtues and vices from people in my life.

Do you plot your stories/book?  Or do the stories develop through the series?
It depends. I would think that authors with an ongoing series would agree with me when I say that once you’ve created characters, they start living and talking inside your head and the author is channeling them. Such is the case with the cast in the Roma Series. That said, however, I do have to think through the situations that I’ve put them into. The arc of the Series is the relationships between the characters, between them and their relationship with .

Do you have a favorite in the series?
Corporate Citizen is my favorite. I had the opportunity to tie off some lingering questions. Also, I can see how I have improved as a writer. While I’m grateful to have had Roma, Underground published, I look back at certain sections and cringe because I can see how I would’ve handled the scene differently now. I might sound critical of myself, but I struggle at times with balance and proportion. Is there too much dialogue? Am I slowing things down because I’m descriptive? I question my devices and strategies. If the reader isn’t a foodie, does she understand why I have food on the table?

Which book in the series is usually the favorite of most readers?
The great thing about being an author is you create something and you never know what to expect for reactions. I’d love to know which character readers like the best. I have friends who love Gennaro, one who who wants more of Silvio, and another one who is rather meh about Dante. I mention this because each book tries to shine the light on a particular character. Corporate is most definitely Bianca’s moment in the spotlight. Fingers crossed that readers interpret Corporate Citizen as the book that takes the characters to another level.

One last question: Do you have Works In Progress?  A new series or new installment in the Roma Series?
I do and thank you for asking. I have three books written for The Company Files, which my publisher, Winter Goose Publishing, will roll out in 2017. I hope to win a new set of readers with it. The writing is very different in style and focus from the Roma Series. The Company Files introduces readers to the early days of the intelligence community; the style is not dark noir, but there is what I would call a Raymond Chandler meets Dashiell Hammett influence.

Thanks so much for taking the time to chat with me.

Here's a little more about Gabriel and the links to connect . . .
Gabriel Valjan lives in Boston, Massachusetts. He is the author of the Roma Series, available from Winter Goose Publishing. Gabriel has also written numerous short stories and essays found online and in print.
Connect with the author:  Website ~Twitter  ~ Facebook

And I Thought....
Looking forward to reading the rest in this series.  Not only is Roma Underground book 1 in the series but it is also the authors first book!  Impressive! Categorized as Romantic Suspense my favorite kind of book!

This is a great fast paced on the edge of your seat story.  I enjoyed the little tour of Italy!  The characters are interesting and endearing and somewhat captivating causing you to want to read the rest of the series.

Overall this was a thrilling ride worthy of a few stars.  5 to be exact!  Check out the rest in the series.

I received a complimentary copy from IReadTours.


Posted by GranthamLynn at 1:00 AM