Bad To The Bone- Book Review-Giveaway 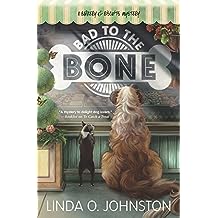 About the book
Veterinary technician Carrie Kennersly, owner of the Barkery & Biscuits bakery for dogs, is reluctant to sell her recipes to pet food manufacturer VimPets. Jack Loroco, a VimPets representative, assures Carrie that it would be a great opportunity to grow her business. His promising new relationship with Carrie’s friend, Billi Matlock, doesn’t hurt his cause. But the budding romance takes a bad turn when Wanda Addler, another VimPets employee, sets her sights on Jack.
After threatening to ruin Jack’s career if he doesn’t give her what she wants, Wanda is found dead. Jack and Billi are put at the top of the suspect list, and Carrie is doggone determined to rescue them from a life behind bars.
Available

And I thought...
The best part of this book for me was the cover!   The best cover I have seen in a while.
I enjoyed the book.  I enjoyed getting to know the characters.
Carrie the main character and her brother Neal and boyfriend
Reed.  And the dog's! Carrie's dog Biscuit a rescue pug and Reed's dog Hugo are all a big part of the story as they go almost everywhere with their respective owners.

Wanda the poor victim was a 'piece of work' it's no wonder the
police and Carrie have a difficult time finding the murderer because there was a potentially Huge suspect list.

Bad To The Bone is book 3 in the Bakery and Biscuits series.
Although I didn't feel lost picking up the series in book 3 I felt that I might have enjoyed the story a bit more if I had read the other two books first.

As the main character woman sleuth that Carrie is she has endeavored to solve crimes in the previous books that have gotten her into some hot spots causing her brother and boyfriend and some friends to be concerned about her investigating.

Her sleuthing almost causes a wedge between Carrie and Reed in book 3.  Reed's attitude put me off a little at first.  But as the story progressed he became a little more understanding not actually supporting Carrie's attempts at solving crimes.  I enjoyed Reed's character and I think I would like to sit and have a beer or cup of coffee and pick his brain a little.  Reed Carrie's veterinary boyfriend is my pick for Coffee with a Character.

Bad To The Bone is a story that has a steady pace and is filled with a few twists and turns.   I had a suspicion who the villain was but I didn't figure out the reason for the crime(s).

I really enjoyed reading this book.  I look forward to purchasing the earlier books.

I received a complimentary copy of Bad To The Bone from
Great Escape Book Tours.

About the author
Linda O. Johnston’s first published fiction appeared in Ellery Queen’s Mystery Magazine and won the Robert L. Fish Memorial Award for Best First Mystery Short Story of the year.   Since then, Linda, a former lawyer who is now a full-time writer, has published more short stories, novellas, and 38 romance and mystery novels, including the Pet Rescue Mystery Series

, a spinoff from her Kendra Ballantyne, Pet-Sitter mysteries

for Berkley Prime Crime, and Harlequin Romantic Suspense as well as the Alpha Force paranormal romance miniseries for Harlequin Nocturne.  She additionally writes the Superstition Mysteries

for Midnight Ink.  Her latest cozy mystery series, the Barkery and Biscuits Mysteries

are also from Midnight Ink.
Connect with the author
Webpage:  www.LindaOJohnston.com
Facebook: https://www.facebook.com/LindaOJohnston
About the series 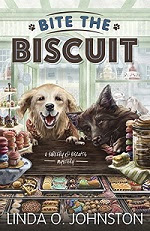 BITE THE BISCUIT, my first Barkery & Biscuits Mystery, was a finalist in the fiction category for the 2016 Dog Writers Association of America’s annual Maxwell Awards!

Carrie Kennersly, veterinary technician and owner of the Barkery and Biscuits bake shop, agrees to a day of hiking with her brother Neal mostly because she wants to meetï¿½and critiqueï¿½his latest romantic interest, Janelle Blaystone. But instead of judgment, Carrie has only sympathy for Janelle, whose beloved black Labrador, Go, was recently dognapped along with many other purebred pets.
Janelle thinks the culprit is Ada Arnist, a wealthy homeowner spotted at the dog parks where Go and the others were stolen. Soon after Janelle confronts her, though, Ada is found dead. With Janelle and Neal on the suspect list, Carrie must solve the mystery before the police bark up the wrong tree.

a Rafflecopter giveaway
Posted by GranthamLynn at 2:30 AM