Welcome sweet friends
Today I decided to start something new
I thought it would be fun to share some lovelies and tell the story about them . . . 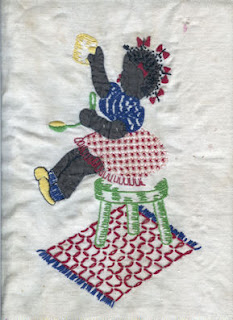 This towel was made by mother many years ago. It is actually hand applique. I don't think my mother ever did anything like this again. She was never a quilter.
She stopped sewing when I was in elementary school. She began working full time.
I began cooking the evening meal at our house when I was in 5th grade. My mother worked at Montgomery Wards at night. She would cook the meat and leave in the oven and I was responsible for the rest. I was even allowed to choose the vegetables.
Which BTW was rather funny because once Ilearned to cook frozen peas and liked them I cooked them a couple of times a week!
Here is another towel that I purchased on Ebay 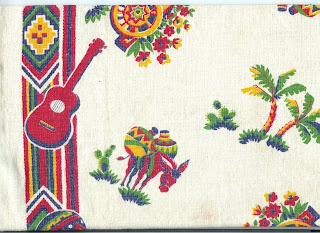 Can you guess why? Yes the donkey. I love anything that has donkeys on it. I love both of these towels. They are displayed on my kitchen counter. They are called "no no" towels.

Cowboy isn't allowed to touch! Do you have a man that spills tomato sauce and grabs a white towel to clean it up?

I mean this man drives me crazy there can be a red towel and a white towel on the counter and what does he do? I'll just leave it to your imagination.

He's doing good though. He 'get's it' when it comes to No No towels

Have a Blessed Day
Posted by GranthamLynn at 6:22 AM