I couldn't help but use this analogy for the review of this book.
Do witches Make Fishes? by Jason Mayo
You see the whole subject of Halloween just tends to put people on the fence.
Personally I am sittin' right there with the best of them.  I mean those of us that are o.k.  with the dress up the kids for the Trick r Treat party part of the whole thing. 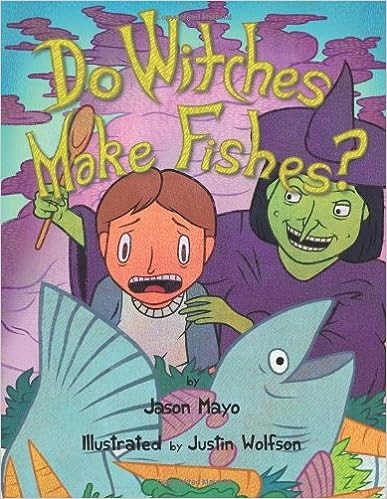 I just finished reading this fun little children's book.  It included a cute way of giving kids a lesson in eating healthy.  It is meant for ages 4-8.

I have a personal custom of doing a little research about the books that I review.  I always check to see where they can be bought.  I check to see if the author has a website or I will include the publisher's site.  Because personally I think a lot of times the author or the marketing folk's can do a better job of describing the book than I can.

I have to say I was in some ways  many ways I was pleasantly surprised about this book.  When I finished reading the book I noticed at the end that proceeds were going to charity.  So you know me I checked it out.   I was so intrigued I checked out the authors blog next.  And that is where I stopped.

Here's what I found . . .
SUNDAY, OCTOBER 4, 2009 Hockey Heals...
I've been going to New York Rangers games with the same buddies for the past 13 years. This year is different. Sometimes life throws you a curve ball. One of those buddies moved away. The other one has Cancer. This year, Opening Night at Madison Square Garden was a date marked on my calendar for all the wrong reasons. Hockey has always been a distraction for us. Through the good times and the bad. This year it was hard to predict who would even be at the game with me. Year after year, we would meet at the seats. The start of each new season brought a sense of hope. That's the beauty of sports. With each new year, comes a fresh start. With one of my friends hundreds of miles away and the other one battling for his life, Hockey season hardly seemed a priority.

Then I realized that Opening Night was actually more important this year than it has ever been. I spoke to my friend who is sick, during the week leading up to the game. I told him that I'd keep the ticket available for him until the last minute. I knew he'd been feeling awful as of late and it would be tough for him to commit

"Dude. If you feel up to it, just call me that day. I'd love to see you there on Opening Night."

He said he can't make any promises but he'd try his best to make it.

The night before the game, I thought to myself that if my buddy was gonna make it out, then I needed to let him know how important it was to me to have him there. I wanted him to know that it was more than a game.

Adam Graves is a former New York Ranger. He happens to be one of the greatest Blueshirts to ever don the sweater. Adam is still a prominent figure in the organization and is known for his selfless commitment to local philanthropies, as well as, being a stellar human being. I took a chance and sent him an email in the hope that my buddy would indeed make it to the game.

This is what I wrote:

I've been a Rangers fan my whole life and a season subscriber for 13 years. I'll be at opening night tomorrow and for many reasons, it will be an emotional night for me. For the past 13 years, myself and two of my best friends have been going to the games together. Lot's of great times. This year one moved away with his family, so he won't be going to the games with us. Then a few months ago, the other one found out that he has Cancer. He's been pretty sick. He had to stop working and he's lost about 30 lbs. It's in his stomach, liver and lungs. We've known each other since we were 12 and reconnected after years apart in 1994 at MSG of all places during the cup run. We've been going to the games together ever since. Obviously because of his health, it's impossible for him to commit to the games this year. This leaves me with an empty seat on most nights. There's not a day that goes by that I don't think of my buddy and the battle he's having right now. We both have little kids and stuff like this really hits you in the heart. His health is obviously bigger than any game but The Blueshirts have always bonded us through the years. I spoke to him yesterday and he said he's going to do whatever he can to get to opening night tomorrow. I'm hoping he feels up to it. I know it's last minute but I was hoping that if he made it to the game with me, there might be some way you could arrange to have some sort of meet and greet or special experience, no matter how simple, for him before or after the game. I'm not sure how many of these he'll get to see in the coming months and something tells me that if I can, I should try and make it a special night for him. I understand if you're too busy. I know you probably get 100's of these a week. I just thought I'd give it a shot.

The morning of the game, I received a call on my cell phone. It was Adam Graves. He asked how my friend was feeling and if I thought he'd make it to Opening Night. I told him that as of yesterday, he planned on coming. Adam said he would send someone to our seats to get us during the game. He said that he reserved a private sky box for us to watch a period with him. Just the three of us. I was blown away by his kindness. I had goosebumps.

My buddy made it out that night and we saw our beloved Rangers beat the Ottawa Senators 5-2. We also spent about 40 minutes with one of our heroes. My buddy cried when he realized that Adam and I arranged the whole night for him. I cried too. Everyone always asks me why Hockey is so important to me. Everyone always wants to know why I get so crazy over a Rangers win or a loss.

This story was the authors inspiration for the book Do Witches Make Fishes?

There were two things that impressed me about the author Jason Mayo.
I have know nothing else about Mr. Mayo.  I have no idea which side of the fence he is on concerning Halloween or anything else for that matter.

And frankly I don't care.  But what I do know is that the proceeds of this book are helping kids.

The proceeds for the book are donated to:

The Garden of Dreams Foundation is committed to helping children in crisis in the tri state area, whether they are suffering from devastating illness, homelessness, abuse, hunger, extreme poverty or tragedy. Garden of Dreams works closely with all areas of Madison Square Garden and Radio City Music Hall to build meaningful, unforgettable programs for children affiliated with 18 local partner organizations.

Excerpts from Amazon reviews . . .
This is a wonderful book for children from four to eight...perhaps even three. It's about a little boy who loves "sweets" so much that he refuses to eat the healthy vegetables and fish his mother cooks for him. Something he does causes his mother to disappear and a witch appears in her place. The witch threatens the boy with all kinds of silly things if he doesn't eat what she cooks for him. The boy is more surprised than frightened because this is not that kind of really scary witch. When he finds his voice, he demands his mother back, pulls some "boy tricks" on the witch and the problem is resolved in a very satisfactory manner. The boy has learned a lesson about minding his mother and about eating healthy, so perhaps your children will, also.
. . .
I love the illustrations by Justin Wolfson because they're colorful and placed in the appropriate places to match the text. But what I enjoy most about them is that they're extra-large, making the characters jump off the pages right into your life. My grandson Devon giggled when he saw them and his eyes just about popped out when I turned to where the boy's head fills the entire page. I giggled right along with him
. . .

So whether your on the fence about Halloween or not this is a great book recommended by many for your child.
This book is available at Amazon.  Click Here.

Thanks so much for coming by my party and sharing.

I'm dropping by from the link party at Party in Your Pjs. Such an interesting background story as to how this book came to be! I'm going to have to check this book out.

I have a link party that I am trying to grow. I invite you to share this idea (and a couple of others) at my Grandma Ideas Sharing Time link party. (By the way, you look TOO young to be a grandma!) My link party is at http://grandmaideas.com. It runs from Wednesday to Friday night at midnight Mountain Daylight time.

I know time is short before this week's party closes. If you aren't able to make it this week, you could drop by next week's party. I hope to see you there!

All the best,
Nina