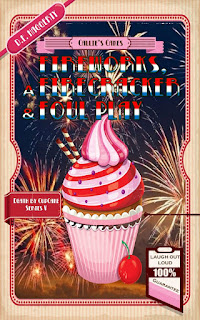 Fireworks, A Firecracker & Foul Play
By D.E. Haggerty
Character Guest Post
Why I gave up finance to bake cupcakes

People claim I’m obsessed with cupcakes. I’m part-owner of the cupcake bakery, Callie’s Cakes, where I’m also the baker extraordinaire. Of course, I love cupcakes. But obsessed? I wouldn’t go that far. Obsessed makes my love of cupcakes sound like an addiction. Just because I eat them every day doesn’t make me addicted, does it?
One thing I do believe about cupcakes is their ability to make anything better. Feeling blue? Eat a cupcake. Boyfriend dumped you? Eat a cupcake. Failed an exam? Eat a cupcake. Aced an exam? Eat a cupcake. Getting married? Make a cupcake wedding cake.
My obsession love of cupcakes began when I was in junior high. All the other girls were developing into women. Not me. I was stuck at five-foot-nothing and as straight as a chocolate sheet cake. I was not a happy camper. Then, this nerdy girl named Callie handed me an Oreo cupcake and I fell in love. Cupcakes became my life. And the nerdy girl? She became my best friend and co-owner of a cupcake bakery.
Now that I’m older, I’ve also discovered cupcakes are mighty handy when you’re investigating a crime. It’s remarkable how quickly a person will open up and answer your questions when you hand them a cupcake. Cupcakes are also handy for comforting a victim. Asking a victim questions before they’ve been comforted is never a good idea. Trust me.
And that’s why I gave up my work as an accountant and became a cupcake baker.

Visit the tour at Great Escapes and Enter The Giveaway

Posted by GranthamLynn at 9:22 AM

Thanks for hosting today's stop of my blog tour!