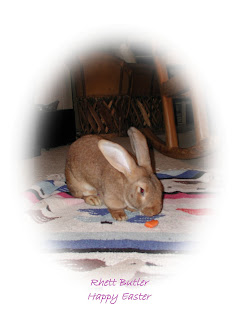 I hope everyone has a Happy Easter tomorrow. This is Rhett Butler. I played around with this photo and put a frame on it and the caption for our Easter special edition.
Rhett Butler is a Flemish Giant. I don't know how much he weighs but his breed can be as big as 24 pounds. He is bigger than both our cats. He is really sweet. He loves any kind of dark green lettuce romaine and bibb especially. You can't feed rabitts iceberg lettuce. So we don't even buy it anymore. I use romaine in everything including tacos. He loves, loves,loves carrots. He is munching one in this photo. He stays in our mudroom during the winter but when it gets too hot I have to move him into the utility room because it is air conditioned. When he is in the mudroom he can run free but during the hottest time of the year he is in a big cage unless I let him out for a "hop". I bought a harness to take him outside to play in the grass but I have never been really successful with that. Mainly my fault I just haven't taken the time. Too many other things to do. Rhett Butler has a tatoo inside his ear. It is a breeder marking. When I first got him I intended to raise flemish giants. But after two unsuccesful births with another rabitt I decided not to do that again. It was traumatic for me to loose the babies. We intended to buy him a girl friend and we were going to name her Scarlet. But we didn't after deciding not to breed. He lives with "Danger" my gray lop eared bunny. I think Rhett Butler must be related to this bunny who lives in Germany. 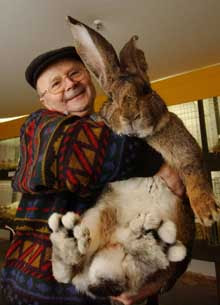 He is even bigger than Rhett Butler. I think he is really cute and he is famous he has been on t.v. and in the news.
My Rhett Butler isn't famous. He did wnat me to tell you though that he could be. He was contacted by the Cadbury company but he didn't take the offer because he didn't want to leave home. (LOL) (Please he really thinks this happened please don't tell him ok.)
We hope that you have enjoyed seeing R.B.'s photo and hearing a little about him.
And please have a Happy Easter. Enjoy your family.
Blessings,Sherry
Posted by GranthamLynn at 3:32 PM

Oh my gosh, are those feet? Those aren't feet they are skis! Guess you gotta have big feet to fit the body.

I enjoyed reading all about Rhett. I want to ask you a question. Rabbits love to gnaw. I would like to know the condition of your mudroom.

I have you on my Google Reader. I will be blogging on Blogspot next week too so I will see you there too.

P.S. The Empty Nest is my blogspot blog. I don't know why it listed me as The Empty Nest. This blog isn't up yet. I commented on your blog as 4urpets.