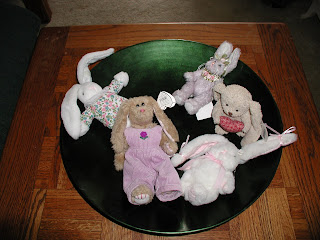 This is a followup to the post I wrote a few days ago about spring decorating. Scroll down to my thursday post and you will think your seeing this photo.
But it isn't the same one. . . 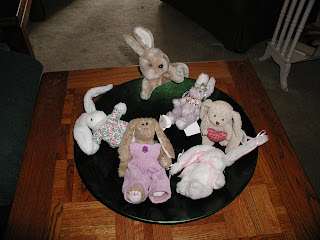 O.K. I'll help you out. Notice on the above photo there is a bunny on the edge of the bowl actually sitting on the table. Look back at the top photo. He is gone.
Here's where he was . . . 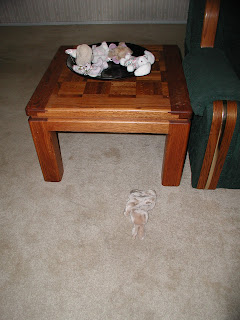 How did it end up there?
Here's how. 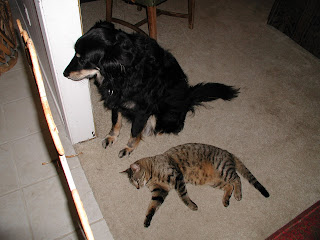 This is a photo of Daisy and Rascal. Rascal is the one laying there appearing to be innocently taking a much needed nap. And I guess the nap was deserved he was tired from terrorizing I guess. Rascal is 5. And he is not sure actually that he is a cat. I have a terrible time taking photos of the cats. They both run everytime they see the camera. Rascal is a lot of fun most of the time. Except when we accidentally leave him in at night and close our bedroom door. We have learned we have to keep the door ajar because he will come in around 4 a.m. and scratch at the door. He loves to sneak in the bedroom in the middle of the night and lay on my feet. I hate a cat on my feet or even next to my feet.
A few nights ago he came in (Cowboy was not a sleep)he watched Rascal come in and wake up Daisy and get her to go and get into trouble. He did this three times that night. I guess I shouldn't complain we did name him Rascal.
And, I really don't think he knows he is a cat. He plays with Daisy. He sleeps with Daisy. His job is catching mice in the barn but he doesn't do that very well. 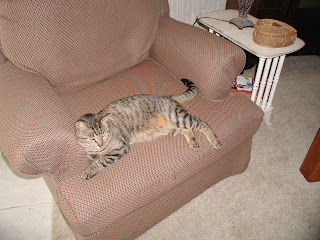 He does do this really well.
He scratches at the door to come in the house. He is a fun cat. Although my favorite pet has to be Daisy. And is always a dog I do enjoy having a cat around. Except when they destory my attempt at decorating. They also climb the Christmas tree. But I learned a trick somewhere tye bells to the bottom branches of the tree and when they go and get under it you'll hear the bells ringing (a pain in the middle of the night...but somethings you have to put up with) then squirt them with a squirt gun and they will run. It works they leave the tree alone. I just can't figure out how to keep them out of this green bowl. I had those little balls covered with seeds on them in the fall and I kept finding them all over the floor.
But I have to smile because they are so cute. And Cowboy loves them even if he says he doesn't!
I promised yesterday I would write about Rhett Butler too. There is a lovely little photo of him at the end of yesterdays post. I played around with it in photo shop and put a frame around it. Rhett Butler is a Flemish Giant. He is a breed of rabitt that can be as large as a house cat and weigh as much as 25 pounds. He is really sweet. He has a big cage but it really isn't big enough for him. The don't make comercial cages big enough. So he gets to live on the floor in our mude room. He goes in his cage if he wants but I don't like to leave him closed up in it too much. He can stretch out completely in it and turn around but he can't really run around and hop which is what rabbits do when they are really happy. I'll post more about Rhett Butler next saturday so you will have to come back and read about it.
Posted by GranthamLynn at 7:56 AM