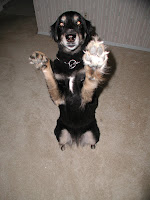 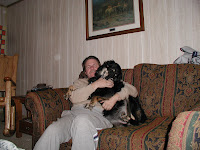 And so...she stays...he doens't suggest taking her back anymore.
And the most amazing thing is that we have looked at the local access channel at least a dozen times. They don't show photo's of the animals. Still think God isn't into the small things?

Verse of the week
Psalms 28:7
the Lord is my strength and my shield. My heart turst in him and I am helped.
My heart leaps for joy and I will give thanks to him in song.
Posted by GranthamLynn at 7:42 PM

What a sweet story about your Daisy-Girl! I agree that God is in the details of life! Nothing goes by un-noticed, nothing is beyond His concern! My friend who has WOODY told me that she believes God brought Callie into her life becasue He knew she needed someone to care about since she and her daughter don't have a good relationship anymore. That opened the door to care for Woody. What an awesome God we serve! Thanks for the heads up that your story about Daisy was posted!
God Bless and have an amazing week in the Lord!
Connie