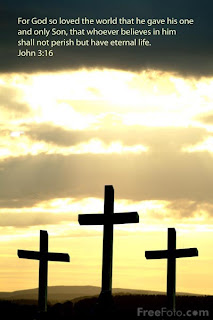 After the Sabbath, at dawn on the first day of the week, Mary Magdalene and the other Mary went to look at the tomb. There was a violent earthquake, for an angel of the Lord came down from heaven and, going to the tomb, rolled back the stone and sat on it. His appearance was like lightning, and his clothes were white as snow. The guards were so afraid of him that they shoook and became like dead men. the angel said to the women. "Do not be afraid, for I know that you are looking for Jesus, who was crucified. He is not here; he is risen, just as he said.
Matthew 28:1-6

Yes. The cross is empty. That is one question that many of the teenagers that I see everyday have. Because they have seen so many pictures of Jesus on the cross. But the wonderful thing is he didn't stay on the cross. He was buried but he rose again on the third day thus fulfilling what was said would happen. And he is waiting preparing a place for all of us. We just have to believe and accept that he did what he did. For those of us who are Believers. Who have been raised being told about this event. Who have gone to church hearing story after story about events that happened in the Bible it is not difficult to fathom. We believe we comprehend that the he is not on the cross and the tomb is empty.

But for those that have never heard the true story. That have never had the opportunity to actually read a Bible and read the account of Jesus' death it is hard to comprehend.

It is hard for me to comprehend that there are actually people out there that have never really heard the true story of Jesus' birth, and life; and then death and resurrection. Yes. We all think about people in far off places that have not heard. And through the churches and missions organizations millions of dollars are spent to spread the word and share the gospel. But there are people. Teenagers right here. Your next door neighbor. The kid that sits by your kid in school.
That have not heard the true story.

They think that Easter is about baskets and bunnies and eating ham at grandma's.
And yes. That is what it is about. We all take the time to celebrate family and go to mom's or grandma's.

But the real truth is that Easter is about Eternity. Our opportunity. Our only opportunity to spend Eternity with the Living God.

So the question is what is Easter to you?
Posted by GranthamLynn at 6:36 PM

Have a blessed Easter with your family!
~Kelli