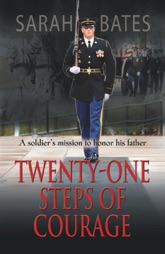 From award-winning author. In 2006, with wars in Iraq and Afghanistan raging, Rod Strong enlists in the Army to achieve the goal his father sought before he tragically died in the Gulf War. His objective: The Old Guard regiment, the elite Soldiers who stand as Sentinels at the Tomb of the Unknown in Arlington National Cemetery. Rod overcomes the obstacles that litter his path until an unexpected firefight in Afghanistan changes his life forever.
Read an excerpt
Even with the wall furnaces blasting full on, Rod felt the cold concrete of Charlie Company's balcony floor through his spits. The heavy soled black shoes meant for walking served Guards fine as long as they kept moving, but not standing immobile for twenty-five minutes while snow flurries wrapped the building. The excitement of Christmas and New Year's Eve at home seemed too long ago. He thought about the sad look on Beth's face when he'd left her at San Diego Airport, and felt a pang of loneliness that made him frown; a forbidden gesture.
"That's one gig, Strong!" yelled Staff Sergeant B.J. Hawkins, descending on him like the predator bird she unfortunately resembled. "Don't let me see five more!"
The tall NCO walked up and down in front of the new class of Old Guard Soldiers, black eyes darting back and forth watching every soldier for mistakes. Rod heard about Hawkins when he arrived. Of the two noncoms assigned to week one of ROP, she had the rep for being the toughest in the bunch.
Instantly, Rod pulled his face into an emotionless mask and began to count the minutes, seeing them fall from a clock, rather than speaking them aloud. Inwardly, he cursed his failure to sustain the ceremonial composure he desperately strove to learn. For all the rigors of PT and the stamina he'd developed, standing absolutely still became an almost insurmountable obstacle. I'd better figure this out, he thought. I got 50 minutes to stand next week and 75 week three. Shit.
By the beginning of week three he'd sorted out a way to trick his mind into standing for 75 minutes with ease. Visualizing the manual of arms, he'd picture the steps like a movie, counting the movements in each routine. Later, he practiced the exacting steps physically under the tutelage of a sergeant. To strengthen his legs, his daily workouts on the roads within Fort Myer became positive highlights. Not content with the three-mile round trip pussy run to the Iwo Jima monument every day, on alternate days he took off for the Washington Monument, six miles. He'd finish the last leg up Cardiac Hill doing Iron Mikes. The punishing lunges strained his thigh muscles to the burning point. He never thought he'd be grateful for the Ranger School endurance ordeal he withstood, yet admitted it prepared him for this.
One Tuesday, turned out in ACUs, Rod and Private Jackson stood with Sergeant Cleveland on a third floor Charlie Company balcony practicing Eyes Right, Right Shoulder Arms. The nearly twelve pound Army M-14 felt like a beast in his hands compared to the lightweight M-16 he'd left behind at Ranger School. Rod and Jackson stood at parade rest waiting for instruction.
"You two are going to march until shit runs down your leg," Cleveland said, "So I don't want to see any mistakes when that happens. Half second off and we do it again and again. Got it?"
"Yes, Sarn't!" They responded
Rod and Jackson kept their eyes on the sergeant, watching his every move and adjusting their weapons. Each then stood at attention, eyes front, left hands clenched.
"All right," Sergeant Cleveland drawled. "And that left arm swings smoothly in unison. You are not puppets!"
"Okay, here's the drill. We're marching, just as our right feet hit the ground, I yell Ready. Next, right foot hits the ground I yell Eyes. Got that so far?"
"Yes, Sarn't!"
"Don't anticipate the command. Eyes are forward. Then I give the command Rightand you snap your head forty-five degrees to the right. Everybody does it at the same time."
"And I want to see your heads snap on those chicken necks." The sergeant paused and looked at Rod. "Show me forty-five degrees, Strong!"
Rod jerked his jaw over his right shoulder.
"That's ninety degrees you idiot! Watch me."
At that, Cleveland snapped to eyesright, his chin pointed halfway to his right shoulder. Jackson, show him how."
Private Jackson executed the 45-degree head snap, glanced at Rod then turned his attention back to Sergeant Cleveland.
"Next step, now that Hotrod knows his geometry, is to bring the weapon down. And I don't want to see any jackrabbit or slo moactions. It's uniform. Got that?"
"Yes, Sarn't," both men said.
Snow had begun to fall and blow onto the balcony, making the floor slick, yet still they drilled. Soon Rod's breath enveloped his face in moist bursts and the M-14 began to feel twice its weight. By 1700 when winter blackness closed in on Arlington and Sgt. Cleveland called a halt to that day's lesson, Rod's arms and legs felt like lead.
He passed week one and two of the Friday tests, even managing to get a little positive nod out of Sergeant Hawkins. When Friday rolled around on week three, he faced Cleveland for his test just before ROP graduation.
"Well, well, Strong, you got your math straight now?"
"Yes, Sarn't Cleveland."
"Let's see you execute eyes rightwhile marching, call it out for me as you do it. I'll tell you when to stop."
Rod stepped off ten times, counting each motion and performing it as routinely aspossible, until finally, Sgt. Cleveland called out.
"Stop. You got it. Stop," the sergeant ordered, throwing up his hand in exasperation. "At ease."

And others are saying (from authors website)
Support by enthused readers
Here’s what readers are saying...
“The author of this book, Sarah Bates, is a liar. She professes not to know much about the military yet she tells an inspiring story that captures the true essence of what the military is all about -- love of country -- unit esprit de corps -- family values -- personal courage. Every high school student, every parent and all of the politicians in this country should read this book.” Lloyd N. Cosby, retired Tomb Guard (Alexandria, VA, US)

“...this is a book of amazing power and emotion. Please pick up a copy today!” Michael Wolf, Writing Coach and Editor (Oceanside, CA)

"I...read the book and I cried A LOT--it was very heartwarming and extremely interesting. When you described the part about him fighting and saving his brother--I felt I was there--a sure movie deal I hope."  Detra Hoffman (Los Angeles, CA)

"Loved your book. It was hard to put down.” George H., (Crystal Lake, Illinois)

“Twenty-One Steps of Courage is a well balanced story about military life. Not too left or right, it's a good read, one that I would recommend to anyone, but especially to people who are thinking about joining the military.” -Caradea Linore, (San Diego, CA)

“The book was informative and well-researched. The story was quite interesting.” LAWonder (Los Angeles, CA)

And I Thought
I was actually surprised at how much I liked this book.
Twenty-One Steps To Courage was much more than I expected.
It was a book filled with lots or emotion and courage.
Sarah Bates does an incredible job of research which makes this
book a great read.
I would recommend anyone to read it.  There is some language
in it but it kind of goes with the territory.
Expect a fast paced and fascinating read as you journey along
with Rod through basic training and then into infantry training
and then Ranger school and ultimately to the 'Old Guard'.
21 Steps to Courage is filled with love of country/family.
You'll  find strength and courage portrayed but very strong characters.
Whether your a fan of military books or not you need to give this one a chance.
I received a complimentary copy.
This review will appear on retail sites and Good Read.

Posted by GranthamLynn at 2:10 PM