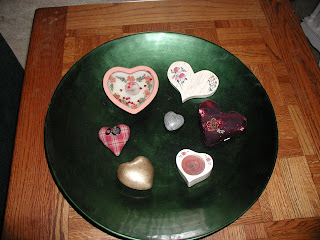 Today instead of taking you on a tour of some friends places I am showing part of my Valentines Day decorating. Actually I guess it is all of it because I haven't done much decorating. I have spent too much time looking at the blogs. This photo is part of my collection of hearts. The gold one is lick a rock that I bought somewhere and I love it. Then there is the grey one it is a rock too. There is a candle, and the little homespun plaid one is fabric and is actually a pin. (I never wore it as a pin. . . I bought it for this collection) It actually had some greenery on it a few days ago but the cats stole it out of the dish and now the greenery is gone I guess they ate it! Is the dark maroon on in the photo? I don't remember it keeps ending up on the floor too. I think it is my favorite it does compete with the gold one though. the maroon one is velvet with beads on it. It has a hanger so it can be used as a Christmas ornament. I bought it after Christmas at Dallas Baptist University gift shop it was on sale really cheap (my daughter went to DBU) and last but not least the green bowl which I just love. I bought after Christmas at Crate and Barrel and it was cheap,cheap,cheap. Not originally though I just love that store. But anyway it was almost free because that year I got gift cards from American Express because of all our spending points. I just love that bowl. It sits on the coffee table most of the time usually empty but sometimes I put things in it to display.
Well I hope you enjoyed seeing my small little collection of hearts.
Tomorrow I'll be doing Friday Show and Tell. So no V.day party. But the party will be back on Saturday. Don't miss it.
Posted by GranthamLynn at 6:23 PM