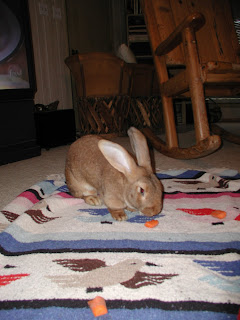 Tonight I am sharing one of my favorite things. And also I want to caution anyone out there that has a rabbit and has cats.

Isn't he just adorable. Rhett Butler is a Flemish Giant. When I first got him we intended to breed and so he was named Rhett Butler and he would have had a Scarlet but after two failed attempts at mothering with a lop eared bunny I decided that I would not get a Scarlet and so Rhett became a friend to a lop eared bunny named Danger and a mini dwarf named Greyson.

Rhett Butler is a Flemish Giant and yes he is big. They can be as big as an average house cat. He loves carrots and dark green lettuces. His "salad bar" he hops around his cage at each feeding time looking for his salad. If he doesn't get any he isn't happy. How do I know this? Well I am his mom and I can tell when he is sad.

Which he was on Thursday and Friday and Saturday. All this is going on while hubby is in the hospital and I am let home to take care of:
3 horses
2 mini. donkeys
1 dog
2 cats
and the two rabbits

Of course anytime he is gone it seems we are destined for a disaster in some way or another. That is what it seemed like when I got home on Thursday night Rhett Butler was laying in his cage. This is extremely unusual. Normally he is hoping around happy to see me and looking for his salad bar. I knew he was sick. I also knew that unfortunately I didn't have the money to take him to the vet. I left his food pellets and salad bar and prayed.
The next morning I noticed that Danger the other rabbit was also not acting normal. I tried to coax R.B. to eat and started trying to figure out what was wrong. He never passes up food. He would eat his lettuce but that was all and he wasn't drinking.
And again I prayed. I began to try to remember how old R.B. is. But it couldn't be anything like that since Danger was acting strange as well. When I got home on Thursday night it was warm in their room (mud room off utility room) so I opened the door to let fresh air in. (they love the cold) I noticed the trash sitting on the floor. And I noticed the trash can I had been using to dump the cat litter. The lid was off. I didn't notice any odor myself because I never notice anything because of sinus and allergies and hubby is not home. He notices if the cats use the box once! I took the trash can outside. And opened the window for the rabbits. I also brought in hay from the barn on the off chance that would help ( I had given them snow peas a few nights prior but they had them before, but I was trying anything)
I went to bed and prayed. This time I prayed that God would forgive me for not taking better care of them. I prayed that he would forgive me but mostly I prayed that Rhett Butler and Danger would not suffer for my neglect. All I could think of was that they were sick and suffering because I was being lazy.
The next morning when I checked . . . I didn't want to for the last couple of days I dreaded going into their room to check for fear of what I would find. But when I checked Rhett Butler had eaten his pellets and had eaten some of the hay. He still wasn't normal but he was eating. By Sunday after checking him 2 or 3 times a day he was pretty much back to normal. Last night he was actually perky shoving my hand as I dumped the pellets in his dish and looking for his carrots.
I praise God that he is ok. I know that to some this would seem like a trivial thing. I know that asking God to take care of your pets might seem strange to some but I know that God is into all the details. The things that are important to me are important to him. I know this because I know that Rhett Butler could have died. He was really, really sick. I know this because it is not the first time that I have prayed and asked God to work a miracle. I know this because I have a dog that God brought into my life and over the last couple of years she has saved me from coming very close to loosing all faith. I know this because "The Lord is close to the broken hearted and saves those who are crushed in spirit" Psalms 34:18.
I shared this experience for two reasons to urge and remind anyone that has rabbits and cats please remember that cat litter is toxic to rabbits and also that God is there in the little things, in the big things,even when you don't see it he is there taking care of you.
As I thought about writing this post it was only my intention to caution rabbit and cat owners but as I begin to think about how God did indeed answer my prayer that there are more stories to tell. Over the next few days I will share two more stories about how God did indeed show himself to me and to my family. Please stop in and visit and see that God does indeed care for the broken hearted.
Posted by GranthamLynn at 7:29 PM

I had no idea that cat litter is toxic to rabbits! Thanks for the tip.

And yes, God cares about EVERY aspect of our lives. Isn't it wonderful?

we'll be like that in a bit here. We've got 4 dogs so far! I hope your hubby is okay!