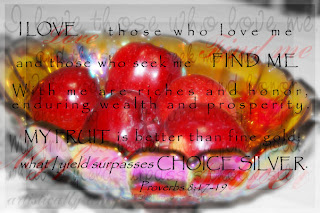 Here's a late wordfilled Wednesday from Amy at the160acrewood.wordpress.com
Thank you Amy. I am probably taking a few days off from a lot of posting because my husband is in the hospital.
He had replacement knee surgery on Tues. We didn't think it was a really big deal because he has had 7 surgeries on this same knee. And he has heard lots of glowing reports from people that have had replacements.
But he is really in a lot of pain and he has been really, really naseuated. This morning he has a fever. He doesn't complain and isn't a really good patient. When he is sick he basically wants to be left alone. Which is hard because I want to be the "good wife" and pamper. He doesn't want pampering. Give him gatoraide or kool-aide every hour or so and let him moan in peace and he is content till he is well. So this is hard on him. And I am worried because I am afraid he is getting an infection. Which happens rarely.
All that being said. Thank you Amy for this beautiful photo and reminder. Blessings.
Posted by GranthamLynn at 7:56 AM

hugs and prayers! I hope all goes well. I know a few people who have had knee replacement and feel so much better! Take your time and remember we'll be praying for you!!!