Stepping Into A New Day-Book Review

About Stepping to a New Day

• Paperback: 304 pages
• Publisher: William Morrow Paperbacks (June 28, 2016)
In Henry Adams, Kansas, you can’t start over without stirring things up . . .
Many a good woman has had to leave a no-good man, but how many of them took a backseat to his six-hundred-pound hog? On her own for the first time, Genevieve Gibbs is ecstatic, even if certain people preferred the doormat version of Ms. Gibbs. Finding someone who appreciates the “new” her has only just hit Gen’s to-do list when T. C. Barbour appears in her life.
A tiny Kansas town is a far cry from his native Oakland, California, but it’s just the change T. C. needs. While helping his divorced nephew acclimate to single fatherhood, T. C. lands a gig driving a limo for the most powerful woman in Henry Adams. It’s a great way to meet people—and one in particular has already made the job worthwhile. All it takes is a short trip from the airport for Genevieve to snag T. C.’s attention for good.
But it wouldn’t be Henry Adams without adding more drama to the mix. When Gen’s ex Riley returns with his hog in tow, it sets off a chain of events that can ruin everything—unless the residents pull together once again to save the day. 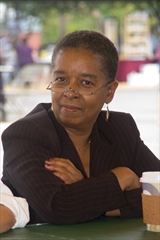 Beverly Jenkins has received numerous awards, including five Waldenbooks/Borders Group Best Sellers Awards, two Career Achievement Awards from Romantic Times Magazine, and a Golden Pen Award from the Black Writer’s Guild. Ms. Jenkins was named one of the Top Fifty Favorite African-American writers of the 20th century by AABLC, the nation’s largest on-line African-American book club. She was recently nominated for the NAACP Image Award in Literature.
Find out more about Beverly at her website and connect with her on Facebook and Twitter.
And I thought ...This was a good book.  I enjoyed the story line.  I loved the small town feel of the story.  I have to admit I did get bogged down with all the characters.  There were so many.  This is a book that takes the reader into the lives of almost the entire town.  At any other time I probably would have gotten more into the story and read it straight through but it did take me a while to get into it.  It did turn into a wonderful feel good story.  I warn the reader to plan a couple of days or more because you won't want to put it down.  I look forward to the opportunity to visit Blessings again.
I received a complimentary ARC copy from TLC Book Tours.  A complete list of other reviews on the tour follows.
My review is posted on Amazon, Barnes and Noble and Good Reads.    I will be linking this post at blog tours including: The Art of Homemaking,Grace At Home Party,     Create with Joy, Share Your Cup
Tour Stops
Wednesday, June 29th: Gspotsylvania: Ramblings from a Reading Writer Who Rescues Birds and Beasts
Thursday, June 30th: The Book Diva’s Reads
Friday, July 1st: Chaos is a Friend of Mine
Tuesday, July 5th: Luxury Reading
Tuesday, July 5th: What Will She Read Next
Friday, July 8th: The Englishist
Monday, July 11th: Back Porchervations
Tuesday, July 12th: A Book and a Beer
Thursday, July 14th: Bookish Realm Reviews
Friday, July 15th: Literary Quicksand
TBD: My Journey Back
TBD: Queen of All She Reads
Posted by GranthamLynn at 5:05 PM