The Beach at Painter's Cover by Shelley Noble-Book Review 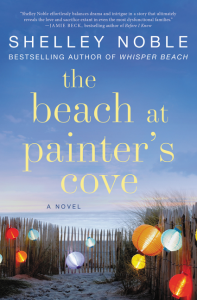 About the book (provided by TLC Book Tours)

From the New York Times bestselling author ofWhisper Beach comes another heartwarming story of four generations of women who reunite in their crumbling family mansion by the sea for a dramatic summer filled with love, family, secrets and sisterhood.
The Whitaker family’s Connecticut mansion, Muses by the Sea, has always been a haven for artists, a hotbed of creativity, extravagances, and the occasional scandal. Art patrons for generations, the Whitakers supported strangers but drained the life out of each other. Now, after being estranged for years, four generations of Whitaker women find themselves once again at The Muses.
Leo, the Whitaker matriarch, lives in the rambling mansion crammed with artwork and junk. She plans to stay there until she joins her husband Wes on the knoll overlooking the cove and meadow where they first met. Her sister-in-law Fae, the town eccentric, is desperate to keep a secret she has been hiding for years.
Jillian, is a jet setting actress, down on her luck, and has run out of men to support her. She thinks selling The Muses will make life easier for her mother, Leo, and Fae by moving them into assisted living. The sale will also bring her the funds to get herself back on top.
Issy, Jillian’s daughter, has a successful life as a museum exhibit designer that takes her around the world. But the Muses and her grandmother are the only family she’s known and when her sister leaves her own children with Leo, Issy knows she has to step in to help.
Steph, is only twelve-years-old and desperately needs someone to fire her imagination and bring her out of her shell. What she begins to discover at the Muses could change the course of her future.
As Issy martials the family together to restore the mansion and catalogue the massive art collection, a surprising thing happens. Despite storms and moonlight dancing, diva attacks and cat fights, trips to the beach and flights of fancy, these four generations of erratic, dramatic women may just find a way to save the Muses and reunite their family.
And I thought
This was a new author and a new type of book for me.  Not really a romance or mystery.  But there is a little of each.

This wasn't a light hearted feel good fast read.  Rather it is  a sit down dig your teeth into and enjoy for a few hours.

I was interested in the story line when the book was offered to me to review by TLC tours.

I took one look at the cover and read the description and I wanted to dig in!

From chapter 1 I was captivated and wanted to know what would happen to the children basically abandoned by their parents.  The were left with an elderly grandmother. Who ended up in the hospital just days later.
To the rescue is their aunt.  Who 'thinks' she doesn't have time to deal to step in and help.

This was truly a book filled with an interesting cast of characters
that make up a truly fun and interesting storyline.

Anyone who loves a little drama would enjoy this new title by Shelley Noble.   The Beach at Painter's Cove is a great summer read.

I received a complimentary copy from TLC Tours.
This receive will appear at the retail sites where available.
This review will appear on Good Reads