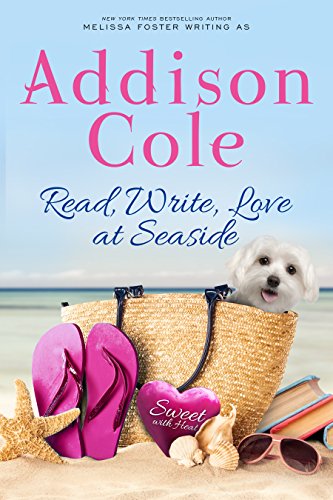 In READ, WRITE, LOVE at SEASIDE...Bestselling author Kurt Remington lives to write. He spends twelve hours a day in front of his computer, rarely leaving the seclusion of his beach-front property, where he's come to finish his latest thriller -- that is, until free-spirited Leanna Bray nearly drowns in the ocean trying to save her dog. Kurt's best-laid plans are shot to hell when he comes to their rescue. Kurt's as irritated as he is intrigued by the sexy, hot mess of a woman who lives life on a whim, forgets everything, and doesn't even know the definition of the word organized.Leanna's come to the Cape hoping to find a fulfilling career in the jam-making business, and until she figures out her own life, a man is not on the menu. But Leanna can't get the six-two, deliciously muscled and tragically neat Kurt out of her mind. She tells herself she's just stopping by to say thank you, but the heart-warming afternoon sparks an emotional and unexpectedly sweet ride as Kurt and Leanna test the powers of Chemistry 101: Opposites Attract.

Sweet with Heat: Seaside Summers features a group of fun, flirty, and emotional friends who gather each summer at their Cape Cod cottages. They're sassy, flawed, and so easy to relate to, you'll be begging to enter their circle of friends! Read, Write, Love at Seaside by Addison Cole is the sweet edition of New York Times bestselling author Melissa Foster's steamy romance novelRead, Write, Love. The stories and characters remain the same, and convey all of the passion you expect between two people in love, without any explicit scenes or harsh language.

If you enjoy fun, witty, clean romance with just a little sizzle you'll enjoy this one!  A great short fast read.

Kurt's plans for quiet are interrupted when he has to rescue
Leanna and her dog out of the sea!

What follows is a sweet and fun romance with a sweet happy
ending.   What was interesting to me is this is the re-write
of a previously written edition that was steamy and contained
language.

I am glad to have been given the opportunity to read this edition.
I am looking forward to reading more in this series.

Leanna Bray was wet, cold, and floundering. Literally. She’d been floundering for twenty-eight years, so this was nothing new, but being pummeled by rain, wind, and waves, chasing a dog that never listened? That was new.
“Pepp—” A wave knocked her off her feet and she went under the water, taking a mouthful of saltwater along with her. She tumbled head down beneath the surface.
Now Pepper and I will both drown. Freaking perfect.
Something grabbed her arm, and she reflexively fought against it, sucking in another mouthful of salty water as she broke through the surface, arms flailing, choking, and pushing against the powerful hand that yanked her to her feet.
“You okay?” A deep, annoyed voice carried over the din of the crashing waves.
Cough. Cough. “Yeah. I—” Cough. Cough. “My dog.” She blinked and blinked, trying to clear the saltwater and rain from her eyes. The man’s mop of wet, dark hair came into focus. He held tightly to her arm while scanning the water in the direction of where she’d last seen Pepper. His clothes stuck to his body like a second skin, riding the ripples of his impressive chest and arms as he held her above the surface with one arm around her ribs.
“Come on.” She coughed as he plowed through the pounding surf with her clutched against his side. She slid down his body, and he lifted her easily into his arms, carrying her like he might carry a child, pressing her to his chest as he fought against the waves.
She pushed against his chest, feeling ridiculous and helpless…and maybe a little thankful, but she was ignoring that emotion in order to save Pepper.
“My dog! I need to get my dog!” she hollered.
Mr. Big, Tall, and Stoic didn’t say a word. He set her on the wet sand and tossed her a rain-soaked towel. “It was dry.” He pointed behind her to a wooden staircase. “Go up to the deck.”
She dropped the towel and plowed past him toward the water. “I gotta get my dog.”
He snagged her by the arm and glared at her with the brightest blue eyes she’d ever seen—and a stare so dark she swallowed her voice.
“Go.” He pointed to the stairs again. “I’ll get your dog.” He took a step toward the water, and she pushed past him again.
“You don’t have t—”


He scooped her into his arms again and carried her to the stairs.

Click here to visit the tour for more reviews
Giveaway

a Rafflecopter giveaway
Posted by GranthamLynn at 12:55 PM