This author has  a new fan! 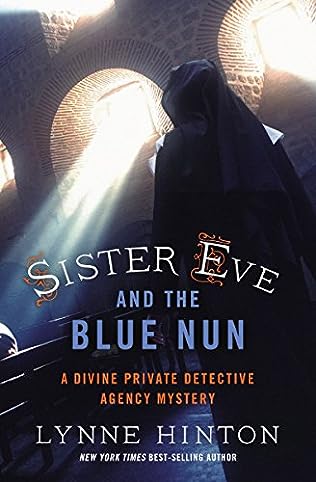 A page turner.  This is the first book I've read in this series.  From page one I was pulled into this thrilling and suspenseful story.

Here's a little about the book from the publisher . . .

When Sister Eve returns to the monastery, the last thing she expects there is murder. After solving several mysteries with her father at the Divine Private Detective Agency, Sister Eve finds herself torn between her calling as a nun and the thrill that comes with detecting. She knows she's been using her father's health as an excuse to extend her leave of absence from the monastery, but that excuse is running thin. She prays that a return visit to the monastery for contain.
a conference on the Blue Nun will help bring clarity to her calling, but when the conference speaker is murdered, Sister Eve's two worlds collide. Sister Eve knows the number one suspect, the victim's brother and monk in residence, couldn't possibly have committed the crime, and she's determined to find the real killer. To do so means she must track down some mysterious newly discovered writings from the Blue Nun, said to date from the 17th Century, when the sister bi-located to the New Mexico region from her home in Spain. Could these texts from long ago be the key to today's mystery And will they offer any guidance to Sister Eve as she chooses which calling to follow.
And from the back cover . . .
Sister Eve, a motorcyle-riding nun with a natural (or is it supernatural?) gift for solving murders returns to the enclave she once called home and quickly finds herself confronting yet
another mysterious death.

Someone has poisoned Dr. Kelly Middleworth-a researcher on the life and ministry of 17th- century's revered "Blue Nun" -- and
a set of irreplaceable historic documents have disappeared before they could even be examined.

When all the evidence seems to point to the victim's brother, Sister Eve sets out to expose the killer and learn the explosive truth those missing manuscripts might contain.

Chasing a killer is dangerous work, and as her two worlds, collide, Sister Eve may need some heavenly help simply to survive.

This title is part of a series.  But it stands alone.  I had no problem getting into the story or the characters.
In fact I really enjoyed the characters.
I caught myself laughing at Sister Eve and her father.  Their banter was quite funny and gave the story some depth.  The story was filled with twists and turns keeping this reader unsuspecting of who the real villain is and how the story will end.


The book is also available in collection!   Click here for a direct link to purchase the collection.

Sister Eve and the Blue Nun was a great book deserving of . . .

I'll be checking out the rest of the series.  Stay tuned!

I received a complimentary copy of Sister Eve and the Blue Nun from Litfuse in exchange for my honest review.

This book is available at Amazon, Barnes and Noble and
Christian Book (dot)com.
Click on the bold type for a direct link to purchase or read additional reviews.
This review is posted at the above retailers and on Good Reads.

This post is linked at
The Art of Homemaking, Book Nook at Create with Joy and Share Your Cup.

Thank you for visiting and following me! Always good to meet another Texan. This looks like an interesting series. I'll have to take a look. Thanks for the review.