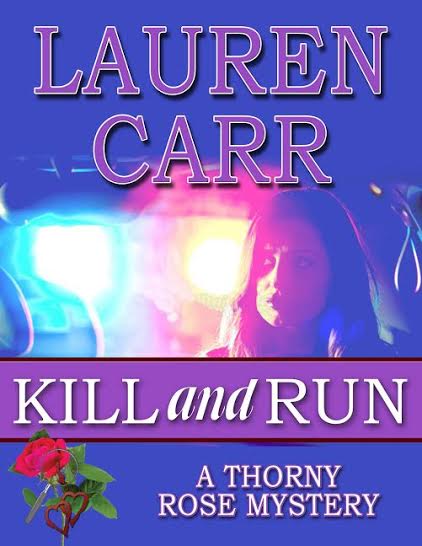 About the book(provided by I Read Book Tours)

Five women with seemingly nothing in common are found brutally murdered in a townhome outside Washington, DC. Among the many questions surrounding the massacre is what had brought these apparent strangers together only to be killed.
Taking on his first official murder case, Lieutenant Murphy Thornton, USN, believes that if he can uncover the thread connecting the victims, then he can find their murderer.
The case takes an unexpected turn when Murphy discovers that one of the victims has a connection to his stepmother, Homicide Detective Cameron Gates. One wintry night, over a dozen years before, her first husband, a Pennsylvania State trooper, had been run down while working a night shift on the turnpike.
In this first installment of the Thorny Rose Mysteries, the Lovers in Crime join newlyweds Lieutenant Murphy Thornton and Jessica Faraday to sift through a web of lies and cover-ups. Together, can the detectives of the Thorny Rose uncover the truth without falling victim to a cunning killer?

And I thought...
I just keep repeating myself where Lauren Carr is concerned.
I haven't read one that I didn't like love.

Kill And Run is no exception.  I loved it.
With each book Lauren takes the reader on a twisty and winding road of mystery.
As with all of her books Lauren gives you a multitude of characters to develop the story line.  And she gives you a great cast of characters in the beginning to help you as you delve into the mystery(s).
Kill And Run brought together the main characters from the
Lovers In Crime Series Cameron (Murphy's stepmother) and Joshua (Murphy's father) and Jessica and Murphy.

When Murphy is assigned to investigate the murder of a Navy
Petty office and 4 other women he takes on the task with determination when he realizes that the Petty Officer left behind a young daughter Izzy who is immediately sent to a foster home that is a less than cozy and safe place to be.

To keep her safe Murphy takes Izzy home.  I loved her character.
She is tough and strong.  But she is just really a hurting little girl that loves animals.  Every animal in the Thornton household ends up adoring Izzy.

When Joshua's father is brought into help with the current murders
Murphy and Jessica and Joshua and Cameron work together to   solve the crimes.

The book ends with everything all wrapped up with all the crimes solved and a little bit of a cliff hanger leading toward the next book in the series.

Kill And Run is fast paced keep you on the edge of your seat mystery.  It was a book that was hard to put down!

I am on pins and needles waiting for the next one!

Lauren's characters just beg to jump of the page and come and sit and chat with you over a cup of coffee.  At least I want to meet them.
The character I wanted to chat with was Izzy.  Maybe not over coffee or tea.  More likely we'd have to share an ice cream
Sundae!

I received a complimentary copy from I Read Book Tours.

a Rafflecopter giveaway
Posted by GranthamLynn at 6:19 AM