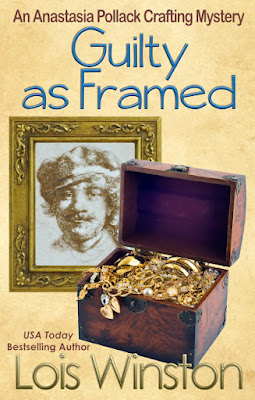 Anastasia in her Own Words

My name is Anastasia Pollack. I’m a recently widowed mom and crafts editor at a women’s magazine. But as the byline states, thanks to author Lois Winston, I’m also a reluctant amateur sleuth, an avocation forced upon me when Lois decided to segue from writing humorous women’s fiction and romantic suspense to writing a cozy mystery series. Ever since the publication of Assault with a Deadly Glue Gun, the first book in the Anastasia Pollack Crafting Mysteries, I’ve been dealing with one dead body after another. And since there are now eleven books in the series, that makes for more murders than most law enforcement professions deal with in their entire careers.

It all began when I was framed for the murder of our magazine’s fashion editor. The woman collected enemies like she collected Manolos, but the detectives didn’t seem interested in looking elsewhere. I realized if I didn’t find the real killer, I could wind up wearing an orange jump suit for the next twenty years. I’m far from a fashionista, but even I know orange isn’t my best color. Besides, who would raise my kids?

However, thanks to Lois, it wasn’t enough of a shock to find my husband had permanently cash in his chips at a roulette table in Las Vegas when he was supposed to be at a sales meeting in Harrisburg, Pa. No, she decided to make him a closet gambler and me the clueless wife who discovers he’s wiped out or savings and left me with a Mt. Everest of debt and his loan shark breathing down my neck. One day I’m living the American dream; the next day I’m on the verge of living in of a cardboard box on the sidewalk.

And it goes downhill from there. Our family used to consist of my husband and me, our two teenage sons, and Ralph. He’s the Shakespeare quoting parrot I inherited from my great-aunt Penelope Periwinkle. However, a few months before Karl died, his mother moved in with us. The woman is a die-hard, old-school communist and the most cantankerous person you could ever meet. She doesn’t have a kind word for anyone except her French bulldog Manifesto, named for the Communist treatise. My sons and I call him Mephisto or Devil Dog.

Then Lois ramped up my stress levels even more. Shortly after my husband died, my mother’s fifth husband passed away, and she also moved in with us. Mama claims to descend from Russian royalty. You can imagine how well she and my mother-in-law get along. Then there’s Catherine the Great, Mama’s extremely corpulent white Persian. If the two grandmothers don’t spark World War Three, their pets surely will.

Before the last page of the first book, I’d had enough. I took up a collection from all the other characters and threatened to send Lois’s muse off on a one-way vacation if she didn’t stop picking on me. She said she couldn’t do that. She had a contract to fulfill. I wasn’t created as a romance heroine. Besides, what’s a murder mystery series without conflict and murders?

After some intense negotiations, we reached a compromise. Lois promised that Zachary Barnes, the photojournalist who rents the apartment over my garage, would eventually develop into a love interest for me. She’s been true to her word, and she did write a nice surprise for me at the end of Guilty as Framed, the newest book in the series. However, Lois being Lois, she also wrote Zack as someone who may or may not also work for one of the alphabet agencies as a spy. With my author, I’ve learned to take my victories wherever I can get them. What choice do I have?

When an elderly man shows up at the home of reluctant amateur sleuth Anastasia Pollack, she’s drawn into the unsolved mystery of the greatest art heist in history.

Boston mob boss Cormac Murphy has recently been released from prison. He doesn’t believe Anastasia’s assertion that the man he’s looking for doesn’t live at her address and attempts to muscle his way into her home. His efforts are thwarted by Anastasia’s fiancé Zack Barnes.

A week later, a stolen SUV containing a dead body appears in Anastasia’s driveway. Anastasia believes Murphy is sending her a message. It’s only the first in a series of alarming incidents, including a mugging, a break-in, another murder, and the discovery of a cache of jewelry and an etching from the largest museum burglary in history.

But will Anastasia solve the mystery behind these shocking events before she falls victim to a couple of desperate thugs who will stop at nothing to get what they want? 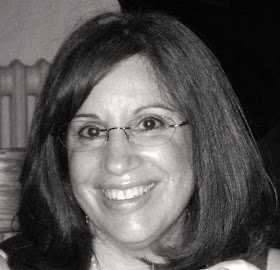 USA Today and Amazon bestselling and award-winning author Lois Winston writes mystery, romance, romantic suspense, chick lit, women’s fiction, children’s chapter books, and nonfiction under her own name and her Emma Carlyle pen name. Kirkus Reviews dubbed her critically acclaimed Anastasia Pollack Crafting Mystery series, “North Jersey’s more mature answer to Stephanie Plum.” In addition, Lois is a former literary agent and an award-winning craft and needlework designer who often draws much of her source material for both her characters and plots from her experiences in the crafts industry. Learn more about Lois and her books at her website www.loiswinston.com where you can also sign up for her newsletter and follow her on various social media sites.

To read reviews and other special posts click Here