Good Morning! Today we have a Special  Treat!  A visit from Blogger Anastasia  Pollack.

She lives inside this book 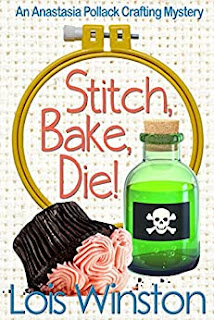 Am I My Author?

People often asked Lois Winston, my author, how much of me is patterned after her. I can tell you, if she wrote my life more like her own life, I’d certainly be a much happier fictitional character. The problem, though, as Lois has pointed out to me, is that protagonists in books need both internal and external conflicts. And boy, did she ever give me conflicts—along with lots of dead bodies.

1. Unlike Lois, I’m not an author. She made me an amateur sleuth, albeit a reluctant one. I insisted on that. I refused to allow her to write me as some snoopy character always sticking my nose where it doesn’t belong and getting into trouble because of it. There’s a designation for characters like that—TSTL (Too Stupid to Live.) I have more common sense and brains than that.

Lois has never stumbled across a dead body. She prefers virtual dead bodies to real ones and solving crimes on her computer in the safety and comfort of her own home. But that hasn’t stopped her from dropping dead bodies at my feet and placing me in situations where I’m forced to figure out whodunit.

2. Lois has given me a small suburban 1950s era house in desperate need of a facelift and crammed it with my two teenage sons, my communist mother-in-law, occasionally my mother when she’s between husbands, and Zack (more on him later.) In addition to the humans, she’s added a menagerie—my mother’s corpulent Persian cat, my mother-in-law’s ill-tempered French bulldog, and a Shakespeare-quoting parrot I inherited from a great-aunt. Lois doesn’t even own goldfish.

3. She also killed off my husband before the first page of the first book in the series. Her husband is very much alive.

4. Speaking of husbands, she wasn’t content to kill mine off. No, much to my shock and dismay, I discovered he’d gambled away all our savings and left me in debt up the wazoo. Lois’s husband has never set foot in a casino, doesn’t play the ponies, and doesn’t owe a staggering sum to a loan shark. The guy rarely even buys a lottery ticket.

5. As for my communist mother-in-law, she was only supposed to spend a few weeks with us while recuperating from a hit and run accident. Now that Karl is gone and I’m two steps away from living in a cardboard box on a street corner, she doesn’t get the apartment he promised her because HE GAMBLED AWAY ALL OUR MONEY!

Turns out Lois had a communist mother-in-law, as well, and she was stuck living with her for six years. At that point she gave her husband an ultimatum—his mother or her. Since he also wasn’t too crazy about the tyrannical commie, he chose Lois over his mother. Smart man.

6. I have a forty-minute commute to and from work in bumper-to-bumper traffic every day. Lois’s commute is much shorter—a flight of stairs from her bedroom up to her office. And she could work in her slippers and jammies even before everyone began working via Zoom.

7. Lois did have two teenage sons once upon a time, but that was a long time ago. One of them now has teenagers of his own.

8. I came into existence when Lois’s agent suggested she write a cozy mystery series featuring a crafter. Lois made me the crafts editor at a women’s magazine. She worked for years as a crafts designer and a craft book editor.

9. With all the murder and mayhem Lois has dumped on me, she’s also seen fit to give me a boyfriend. Actually, I demanded it, given that she wrote me into a mystery series and not as the heroine of one of her romances. But what a guy she gave me! Zack Barnes looks like his genes swam around in the same primordial pool as those of Pierce Brosnan, George Clooney, and Antonio Banderas. He’s a photojournalist. But Lois couldn’t leave it at that. I think the photojournalism gig is a cover for his real job--a spy for one of the alphabet agencies. Why else is he always running down to D.C. and flying off to weird places like Madagascar?

Lois’s husband? Not exactly cover model material, but she thinks he’s cute. And the guy is definitely not a spy. He’s a retired engineer.

10. Finally, one good thing about being a fictitional character, I don’t age the way my author does. Since first appearing in Assault with a Deadly Glue Gun in January 2011, I’m only a little more than a year older. Lois, on the other hand, has aged ten years. Seems fitting, given I feel like I’ve aged ten years thanks to her.

With massive debt, a communist mother-in-law, a Shakespeare-quoting parrot, and a photojournalist boyfriend who may or may not be a spy, crafts editor Anastasia Pollack already juggles too much in her life. So she’s not thrilled when her magazine volunteers her to present workshops and judge a needlework contest at the inaugural conference of the NJ chapter of the Stitch and Bake Society, a national organization of retired professional women. At least her best friend and cooking editor Cloris McWerther has also been roped into similar duties for the culinary side of the 3-day event taking place on the grounds of the exclusive Beckwith Chateau Country Club.

Marlene Beckwith, wife of the multi-millionaire pharmaceutical magnate and country club owner, is both the chapter president and conference chairperson. The only thing greater than her ego is her sense of entitlement. She hates to lose at anything and fully expects to win both the needlework and baking competitions.

When Anastasia and Cloris arrive at the conference, they discover cash bribes in their registration packets. The Society members, few of whom are fans of Marlene, stick up for the accused and instead suggest that Marlene orchestrated the bribes to eliminate her stiffest competition.

The next morning when Marlene is found dead, Anastasia questions whether she really died peacefully in her sleep. After Marlene’s husband immediately has her cremated, Anastasia once again finds herself back in reluctant amateur sleuth mode.

With the help of Cloris, Marlene’s personal assistant Rhetta, and a laptop someone will stop at nothing to find, Anastasia soon unravels evidence of insurance scams, medical fraud, an opioid ring, long-buried family secrets, and too many possible suspects. And that’s before she not only stumbles over the body of yet another member of the Stitch and Bake Society but also finds Rhetta unconscious.

Can Anastasia piece together the various clues before she becomes the killer’s next target?

When Anastasia not busy cooking,crafting and solving  mysteries  and craft she writes her own blog.